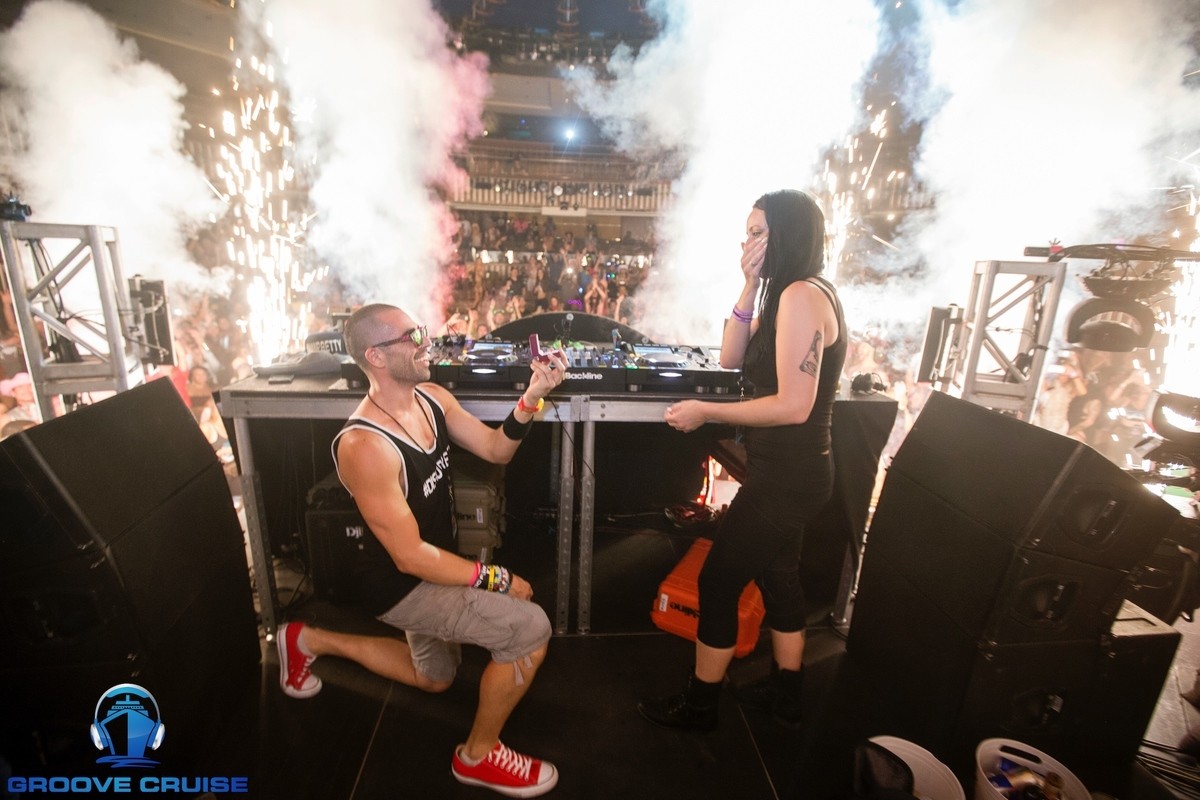 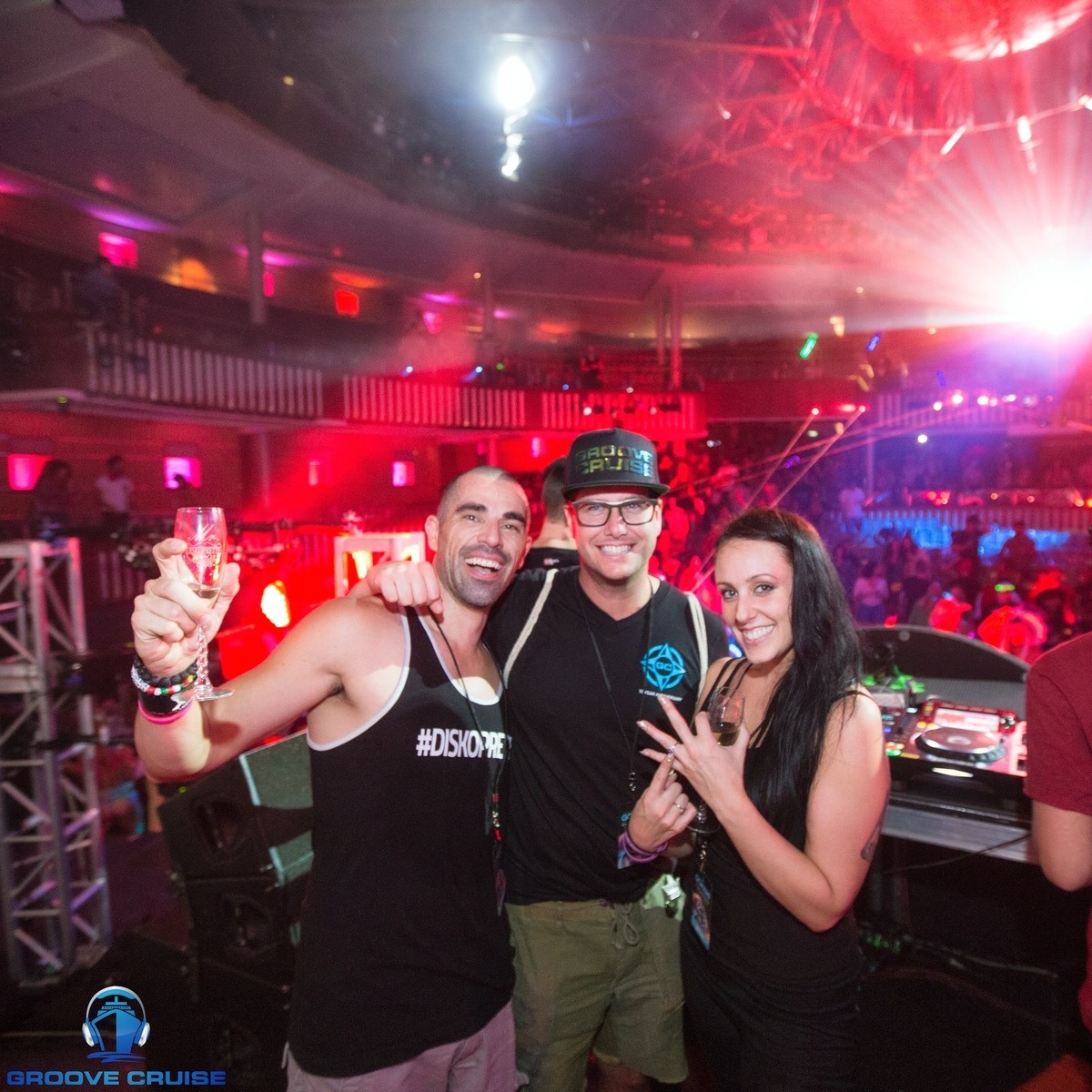 February, the month associated with love is passing us by quickly. With Valentine's Day behind us love is still in the air and who doesn't like to read a good love story. While it is no secret to many Groove Cruise attendees that marriage proposals and weddings often take place aboard the epic dance music cruise, amongst the beachwear, costumes and disco balls. Januarys 2019 Groove Cruise Miami saw two of its own crew become engaged. Dj Keith Christopher proposed to his girlfriend of four years, DJ JDisko at their Diskopretty duo set in front of many of their friends and fans. While each of them has played individually many times aboard GC, this was officially their first set together on GC as Diskopretty. Keith and Jenny have played once together on board in 2015, the first night they met; they call it their first date. Keith said, "we connected instantly over great conversation and a few drinks in the famous Haven Suite." That night the two spontaneously hit the decks for an eight-hour b2b set, which led them to the next four years together. Over the years they have celebrated every anniversary onboard Groove Cruise Miami, making it the perfect place for Keith to pop the question.

The proposal was not the only major accomplishment for Keith this year, closing for Kaskade made this years cruise something they could never forget. I chatted with Keith and Jenny shortly after they returned and they filled me in on their musical love story and working together in the music industry. Check out our interview below, I forgot to ask them one question, and I am sure I am not the only one wondering. Will the wedding take place on the Groove Cruise, Keith and Jenny? 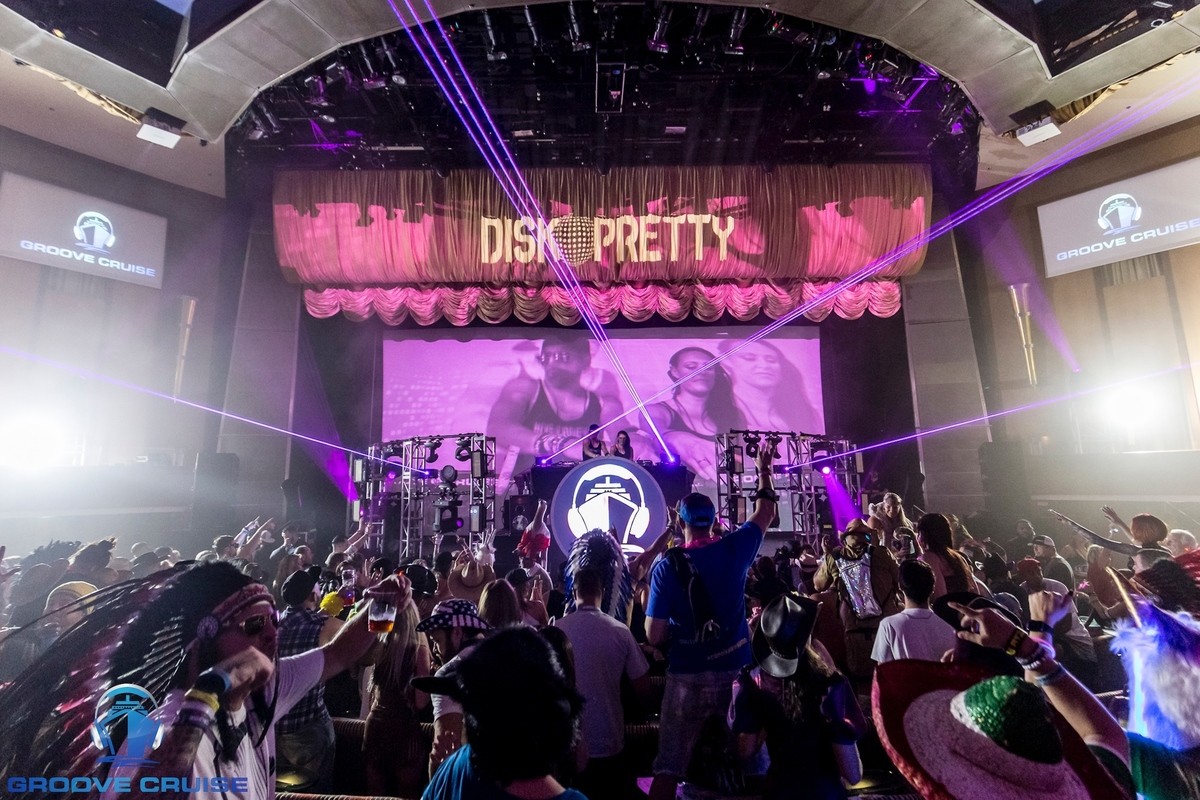 Ellisha : Keith at what point did you know Jenny was the one?

Keith : Yeah I definitely couldn't pinpoint the exact moment. A few months after I brought Jenny down to visit and play a show, we had a great time in ten days, no fights, it all just felt natural. We did long distance for two years, and that was a challenge that most relationships don't survive.

Ellisha : Jenny at what point did you know Keith is the man for you?

Jenny : I suppose you just know. There's not really a certain point it was just perfect & effortless... like our first set. Lightning in a bottle and we Caught it.

E : Keith you proposed at the Diskopretty set aboard Groove Cruise Miami in front of a large group of supporters how did that feel? Were you nervous?

K : I feel relief now that it is all done haha!! Honestly, it truly felt amazing!! The Whet Travel team and I planned that show and all of the details for a little over four months! There is a lot of moving parts in a major festival, the fact that they were able to not only fit everything in that I wanted but also nailed each detail, was nothing short of a miracle!! I wasn't nervous about the actual moment; I was more nervous about having everything perfect leading up to the moment. It couldn't have gone better. I was expecting a couple hundred people in there since we were opening, but word got around quickly, and by the time that moment came, that theater was packed!! I cant thank Whet Travel and our GCFAM enough for all of it!!

E : Jenny did you have any idea Keith was going to purpose aboard GC Miami? How did you feel at that moment?

J : I was the only person on the entire ship that DIDNT know. Lol, I was so fixed on mixing; it took me a second to realise what was going on. It was literally the best secret on the boat!

E : The two of you have powered up as Diskopretty can you tell me what it is like working together?

J : We even each other out. The balance between us as far as business and art go is perfectly in sync.

K : We never really discuss music or share tracks, so what you see behind the decks is happening organically. Most importantly,we have fun together. I think so many people in this industry take themselves so seriously, and the fun gets lost in it all. People definitely feel the vibes we project, and we feed right back off of all of them!!

E : What has music done for you both personally and what has it done for your relationship?

J : It's an amazing accomplishment already to be able to travel the world and DJ. Its even more amazing to be able to do it all with my significant other. We live the dream.

K : I've spent more than half my life on this craft with no immediate plans to slow down until my goals are reached. Its amazing to be able to share that with someone who shares those desires and pushes you to be your best. We do that for each other, and we every time we perform, we want people to feel that.

E : You have both been in the music business for a long time, late nights and party atmospheres can have its challenges on any relationship. Is there anything you do together or individually to keep your relationship strong?

J : The first two years we were together, was long distance. He is in Florida; I was in Michigan. We had to rely on strong communication to grow. Also, we are still strong individually, helping us as a power couple.

K : At the end of the day every relationship requires communication and work. Some of those late nights just end with us sitting on the couch having a beer together. Talking about a night out performing, or laughing about something we saw. What makes it strong is the quiet moments we have together, so that when we are out in public, performing, surrounded by people, we are united in our effort to give everyone a memorable experience. If it looks easy, its because we love what we do! :) 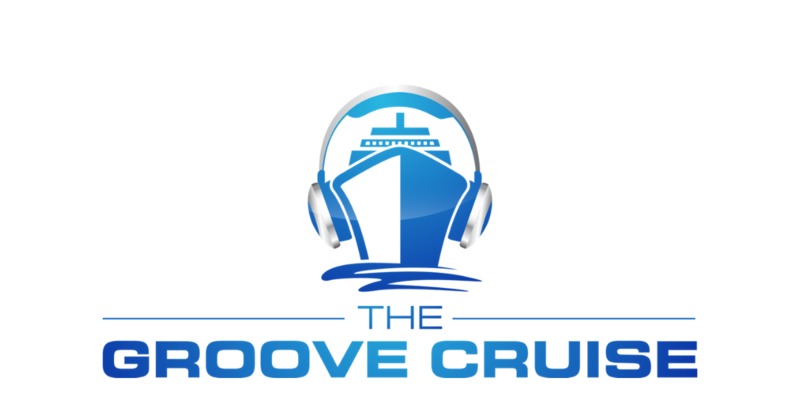 Groove Cruise Miami 2020 tickets are on sale now and quickly selling out, book your tickets from the link below. 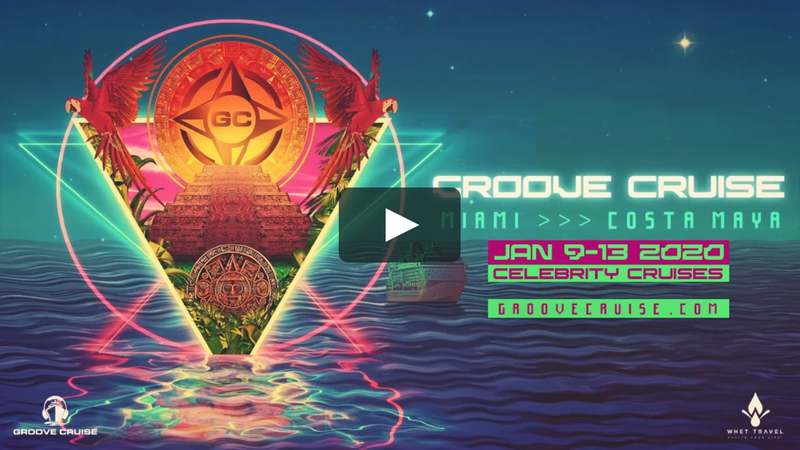 Ellisha
The Love Is Real Aboard Groove Cruise