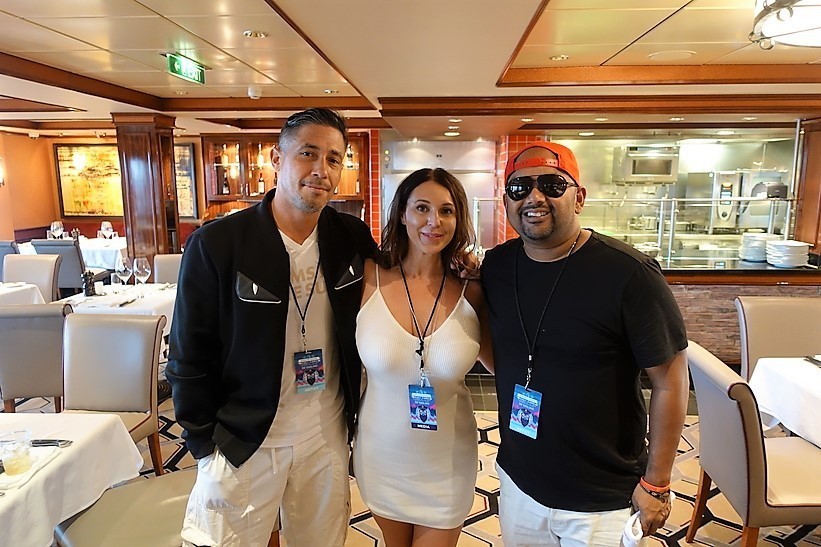 Drums Of The Sun 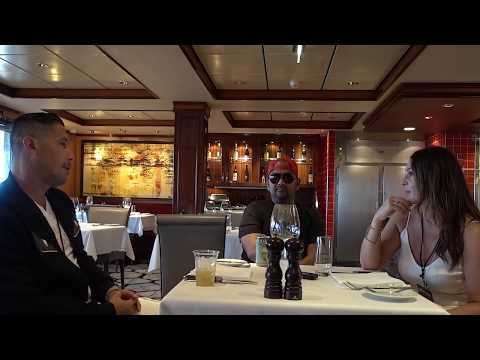 Dinner Convo With Drums Of The Sun

While exploring the Norwegian Peral aboard Groove Cruise Cabo many sights and sounds caught my attention. Only being day one I knew I was in for an epic four-day adventure along with enthusiastic party goers and many talented artists. Finding myself a little lost I followed the trail of sequins, glitter and one of my favorite sounds, the drums! Here I found myself in front of Drums Of The Sun, who at the time was in the middle a five-hour set in a private suite party, these guys didn't stop! I wouldn't call it overly private; occupants were happy to invite any part of the GC fam inside to share in the dancing, music and the giant table full of pizza and bacon. For those of you who do not know what the GC fam is, many of the attendees and artists attending Groove Cruise consider themselves part of a musical family connected through the experience, love and music. If open to it you can certainly feel the connection with many attendees even after departing the boat.

While watching DJ Louis Dee and percussionist Bam Bam Buddha sync their talents, I was instantly in awe. This duo puts on a truly unique show and adds upbeat energy to any room, always drawing in a crowd. Bam Bam's drumming is the perfect addition to Louis Dee's Latin and tribal house music, Louis has been a DJ for many years out of Miami. Bam Bam, who is currently living and travelling out of Chicago met Louis at NYE party in Chicago in 2010 where they played together for the first time. They were quickly reunited on Groove Cruise Miami 2010, continuing to play together from then on Drums Of The Sun officially came to be in 2015. While both still performing solo locally and internationally, Drums of the Sun has been travelling and performing together frequently and have lots in store this coming year. They currently have a residency aboard Groove Cruise Miami and played their first west coast GC this year. They also have an upcoming residency in Las Vegas.

I caught every show this duo played on the boat, always attracting and creating a great vibe. Having said themselves, they want the crowd "vibin out." Finding a quiet place without distraction for an interview aboard the epic party boat wasn't the easiest task, but we managed to find a space with a "little" quiet. Check out our interview below where the two chat with me about working together, their love of music, future endeavours, the Groove Cruise experience and more. Bam Bam claims he is not much of a dancer, but I beg to differ, I saw him break out some moves a few times. And Louis, he enjoys his time at the gym, and I give him extra points for making it there onboard the cruise, that's dedication. The rest of us were rolling out of bed at the sound of GC founder Jason Beukema's early morning wake up call to rejoin the party. That is if you slept at all the night before, this party is 24/7. If you are lucky enough to be attending Groove Cruise Miami be sure to catch at least one of Drums Of the Sun's sets. Trust me you will enjoy every beat. 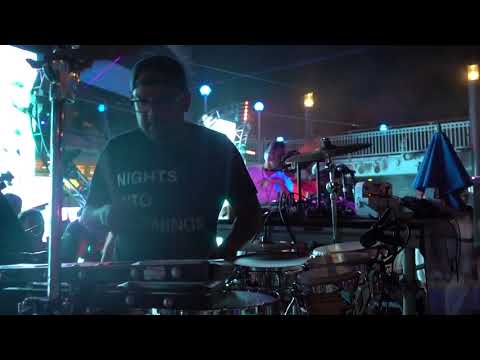