Please note that due to the COVID-19 pandemic, many events around the world are being cancelled or postponed. Please be sure to visit the official website of any event you are planning to attend to ensure that is has not been canceled.
Big Valley Jamboree

This is the general information page for Big Valley Jamboree. For specific events/years follow the links below. 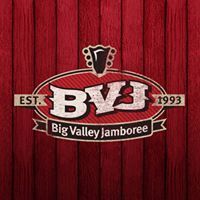 A word from Big Valley Jamboree

"In 1992 the owner/operators of Big Valley jamboree, Craven Saskatchewan were looking for a location to host a second festival in Alberta. Big Valley, Alberta was chosen as the original location; name and geography being one of the main deciding factors.

In September of 1992 the promoters hosted a weekend rock concert headlined by Bryan Adams. Mother nature unleashed her fury and a freak snow storm devastated what was to be a spectacular event. Although the site location had a spectacular view, road access, services and amenities were not available to handle the potential crowds expected for an annual event. The spring of 1993 saw the promoters once again searching for a new home for the country music festival.

The Camrose Regional Exhibition (CRE) was in the process of resurrecting the annual summer fair; moving from its original city centre location to what is now the exhibition grounds on the east end of the city. The BVJ promoters approached the CRE with the idea of taking over the annual fair weekend; brining International and national artists to the community. After much deliberation, the CRE Board of Directors voted to cancel the production of the Camrose Country Fair and work with the BVJ promoters offering a facility and community services to accommodate a high profile music festival.

So there is no big valley, no hills, no river, but the Big Valley Jamboree name has significance and history. Its over 25 years later, the festival has been named CCMA Country Music Event of the Year 5 times which would indicate that the original promoters had a valid idea; Alberta is a great place for a country music festival. And Camrose is proud to be the city of choice!"